F.M.B. was set up in 1982 and was one of the very first companies to propose band sawing machines and in 2012 stats to produce drilling machines.
All their products are the result of in-depth studies and sophisticated computer systems, plus stringent practical trials and tests.
F.M.B. is always well aware of how important it is to be able to offer a continuoulsy evolving machine - that's why we've invested heavily in our technical and engineering office.


During the drilling process the tool heats up greatly due to the friction which is generated and need then to be cooled.

The use of traditional cooling systems involves a number of disadvantages:
- Working environment not cleaner
- Disposal of the emulsions
- Wet burrs
- High oil consumption.


F.M.B. has entrusted to our modular system of minimal lubrication MiQueL to solve the problems encountered during the work cycle.

MiQueL is the solution "ready to go" that thanks to series of patented features ensures a continuous precise and without waste lubrication thus increasing the performance of the machine. This solution eliminates the problem of disposing of the emulsions and at the same time reduces the environmental impact of its oil emulsions.

In addition to the drilling machines, FMB proposes Miquel also as an optional on their saws machines.

Minimal lubrication system -MiQueL- has been designed and developed, a new technology that will replace the traditional cooling or full oil system within a working environment.

"We are very satisfied of Miquel ..." says Carlo Mariani, FMB Head of electrical and Hydraulic Division "... since applying I solved problems that other products have not been able to solve". 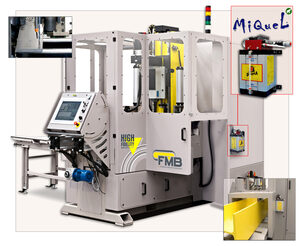 This case application was implemented using