Conversion from double to single output

In this type of system, the lubricant, distributed by control units (e.g. Gear pumps, hydraulic pumps) is pumped into a single input by a “progressive distributor” or “divider”, and is divided volumetrically into a certain number of points through the progressive movement of the pistons arranged in sequence.

In some types of plant, it is always possible to change the assembled distributor to increase or reduce the reach of every output, or even to close the right or left-hand side of an element that is already installed to connect the outputs (or otherwise on an element provided with a single output to reopen the stopped output in order to add a point of lubrication).

The progressive distributor models that Dropsa offers in its product catalogues, which the same procedure described in the following sections can be applied to are SMX and SMO in steel and stainless
steel, NP (Nano-Progressive) and NPR+ (Nano-Progressive Replaceable).

Progressive distributors: close the right or left-hand side of an element that is already installed to connect the outputs. 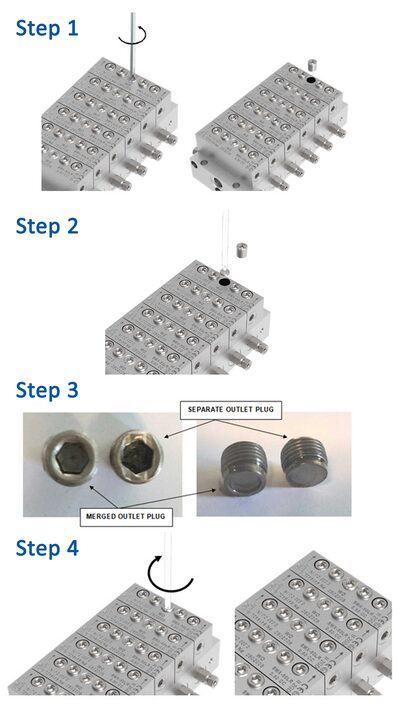 Every type of distributor element SMO - SMX -nP - nPR+ has a central plug, that can be easily unscrewed to modify the configuration.

Below, we will show you how to change between the double output configuration and the single output one, just follow these steps:

- STEP 2: Using a clip or a small flat-head screwdriver, remove the small sealing disk under the plug.

- STEP 3: After removing the sealing disk, the two outputs are now connected. You must install
a new plug. The standard pin installed on the separate socket application elements has a flat base to press the sealing disk.

The plug for the connected output applications has a suspended ceiling base to allow oil or grease to flow from right to left and vice versa.

When you proceed with these operations, you should have a series of tricks such as:

- Remember to connect the output of the element (left or right) if you are using the two outputs.

- If the plug is not used, oil and grease will start to leak out of the output (or the connections) and after one cycles, the distributor will be blocked.

- The plug to be used in place of the fitting has a G1/8 thread.

- The plug removed from the centre of the element can be used if the new plug 0641708 is available.